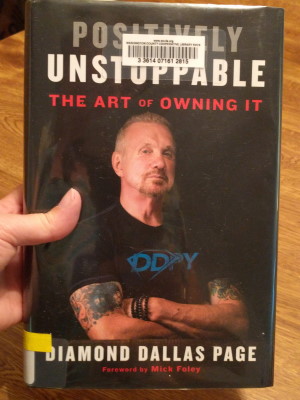 Almost everyone I know has seen the inspiring weight-loss and fitness transformation of Arthur Boorman, a paratrooper with a broken back who was told his case was hopeless. If you haven’t seen the video, go watch it now. I love Boorman’s story. It’s the very definition of “positively unstoppable.” The process he used was DDPY, or DDP Yoga, designed by pro wrestler Diamond Dallas Page.

I’d never heard of Diamond Dallas Page. My only exposure to pro wrestling came from Andy Kaufman’s weird encounters with Jerry Lawler back in the ‘80s. But when I learned that Page developed his recovery program to save his own career—a career he began at age 35—I was captivated.

Few people embrace the opportunity to change any kind of career at age 35. An athletic career? Get real. When Page ruptured two disks in his back, multiple specialists told him he was finished as a wrestler. Instead, he developed his own physical rehabilitation program and resumed competing in less than three months.

I love a comeback.

When I saw his book, Positively Unstoppable: The Art of Owning It, on the “New Books” shelf at the library, I grabbed it.

Are you already familiar with his career? If not, check out this book. He describes having the kind of childhood that sends many people down a path of addiction and poverty. He entered adulthood unable to read beyond a third-grade level, due to undiagnosed ADD and dyslexia. He always had athletic leanings, but accidents and illnesses repeatedly demanded that he reinvent himself.

He talks about the importance of being clear about what you want and focusing on action. I appreciated his ongoing refrain that people will want to hold you back, but they can only affect you as much as you allow them to. I was surprised by how much adversity he encountered, both impersonal (like the car accident as a teen) and personal (from other people in various industries). Page talks about how to get your attitude right and how to put “failure” in perspective, so that setbacks don’t permanently derail you.

There are fun mnemonics in here, like SMACKDOWN (specific, measurable, achievable, compatible, keep it going, do it, own it, write it down, now), and there’s lots of profanity. If that kind of thing offends you, this may not be the book for you.

Have I been wrong about hypnosis?

I appreciated that Page didn’t minimize the challenges he faced. He describes the excruciating pain, shame, and confusion he often felt when tackling a new challenge. He admits making mistakes and misapprehensions. He also makes it clear that failure is part of living. We’re never done, and we never get to a point where we won’t struggle and fail. A lot of writers move quickly past the tough stuff, gloss over it, or give the impression that a sunny attitude is all you need. Page doesn’t. I really appreciated his stories of positively unstoppable perseverance.

If you’ve ever heard me speak, you may have heard me say that one reason I love hypnosis is because it makes things easy. Have I changed my mind? Am I now saying, “No pain, no gain”?

I don’t think it’s either/or. I definitely think my own assumptions can make things harder than they need to be. Still, life consists of peaks and valleys, and although I get stronger when I’m on a climb, it also demands more skill than the flatlands. Doing something new means I’m going to stumble, fall, and make mistakes. I might feel frustrated, discouraged, and stupid. I can stay in those feelings and decide that’s the “truth,” or I can respond, “So what? It might be hard now, but I’m doing what’s necessary; I’ll get past this. The payoff is worth it.”

Getting to that point can take minutes, hours, days, weeks, or longer. It depends a lot on the tools we use, the people around us, and our assumptions. Page talks about this in the chapter about owning your environment. He actually uses something I’d call hypnosis with his massage therapist, Terri, to help her move past negative assumptions about her 50th birthday. That’s one of the things I really love about this book: Page is incredibly creative. He’s one of those guys who says, “Yes! I’ll try that!” a lot.

The first eight chapters of the book are biographical. Page writes about his childhood, his marriages, his careers, his successes, his setbacks, and his systems. His conversational writing style is both tough and tender, which I find an inspiring combination. The final three chapters of the book describe his DDP Yoga program (exercises and nutrition) and provide some worksheets for formulating and tracking goals.

There is plenty here for anyone who wants to dig in and create something new in their life, especially if it’s a positively unstoppable attitude and work ethic. Page’s book is both practical and philosophical, and he makes it clear that it’s never too soon or too late to “own it.”

Mitch Horowitz begins his history of the positive-thinking movement with memoir, sharing a humble account of how he became interested in the topic. He ends his book with a challenge to others to test the principles. Between those brackets, he sets out a feast for those of us who have been starved for substance when it comes to the idea that “thoughts are causative.”

I became interested in hypnosis when I was very young — a sophomore or junior in high school — and I’ve always been a science-loving nerd. Most popular books on how ideation affects reality do not speak to me. They seem superficial, sloppy, hyperbolic, poorly edited, or all of the above.

Enter One Simple Idea: How Positive Thinking Reshaped Modern Life. It makes me want to weep with gratitude.

I’ve never considered positive thinking as a theology or philosophy. I’ve always thought of it as a function of neuroscience and physics. Horowitz introduced me to a lineage of positive thinkers for whom positive thinking (or New Thought) was an aspect of spirituality. Their names were new to me, and Horowitz paints each one as a full-blooded, vibrant human being, with dreams, families, careers, obstacles, and victories (not always in that order).

Horowitz unfolds a fascinating history, describing vigorous personal correspondences, bitter feuds, secretive scandals, astonishing creativity, unrepentant plagiarism, and not so much an evolution of ideas as a dialog across time and geography.

Many of the people who populate these stories could easily support whole books of their own (and I hope they do). Helen Wilmans, for example, who said she wanted to start her own newspaper and was laughed at… before becoming a phenomenally successful writer, speaker, and publisher. I wish I could have met her.

One Simple Idea isn’t just a series of biographical vignettes. Horowitz simultaneously traces how the actions of these individuals and their followers imprinted upon American culture to affect business, politics, and religion, in addition to personal conduct. As such, it confronts “the positive-thinking movement’s most serious and lingering dilemma: What are the ethics and moral credibility of a movement that considers the outer world nothing more than a reflection of an individual’s private outlook?”

Although one final chapter tackles these questions in depth, Horowitz taps this note throughout the book. This is one reason I’m loving so hard on One Simple Idea. There are no easy answers. Horowitz works hard to reach them. In doing so, he snatches the topic back from the hands of feel-good psychobabblers who bang out a version of philosophical Chopsticks in a concert hall begging for Mozart. Not to say Horowitz is Mozart, but he knows the difference between simple and easy. One Simple Idea is rigorous in questioning and reporting, and it cites its sources like a serious work of nonfiction, which I love so much that I want to kiss the damn thing, but that would leave lipstick on its pages.

The final reason this book makes me want to weep with gratitude is its language. It is rich, clear, scholarly, and nuanced. Horowitz has a deep respect and affection for his subject matter, and even as he writes with authority, there is an underlying humility and vulnerability. He does not pander or condescend. He challenges rather than criticizes, without being snarky or shaming.

And he appears to be incredibly prolific, so I look forward to reading many more of his books.

Before You Know It: The Unconscious Reasons We Do What We Do is about how the nonconscious mind affects our choices, decisions, behaviors, moods, relationships, and performance. It’s an absolute must read if you want to get a better grasp on your thinking and habits.

John Bargh, PhD, writes about how we as humans are affected by forces within us and outside us without ever noticing it: The hidden past, the hidden present, and the hidden future.

Bargh has written a personal, funny, and engaging book. His ACME Lab at Yale (the Automaticity in Cognition, Motivation, and Evaluation Lab) invokes Wile E. Coyote and the Roadrunner as metaphors of the conscious mind (thinking it’s far more clever than it is) and the nonconscious mind (speedy and trumping all “supergenius” efforts). Bargh illustrates his research using everyday experiences that we all can identify with. If you didn’t believe that the nonconscious mind directs your behavior without you knowing it – you will be surprised.

“We strongly assume that what we are thinking and feeling is driven by what’s happening right now in front of us, and we hardly ever question that assumption,” Bargh writes. “Yet quite often something more than what is right here and now is acting upon us. It is the past – our species’ ancient past, our unique unremembered infant past, and our very recent past, just now receding in the rearview mirror of our day. All of these different yesterdays matter, because they are still affecting the most important moment in every person’s life – the only moment Einstein believed actually existed – the present.”

Some of the influences of the nonconscious mind are so invisible, that people confidently deny they exist, but scientists are measuring the effects. By learning about them, you can protect yourself from bad choices and live a more intentional and satisfying life.

“The most effective self control is not through willpower and exerting effort to stifle impulses and unwanted behaviors,” Bargh says. “It comes from effectively harnessing the unconscious powers of the mind to much more easily do the self-control for you.” He devotes a whole chapter to measurable steps toward taking better control over your thoughts and actions.